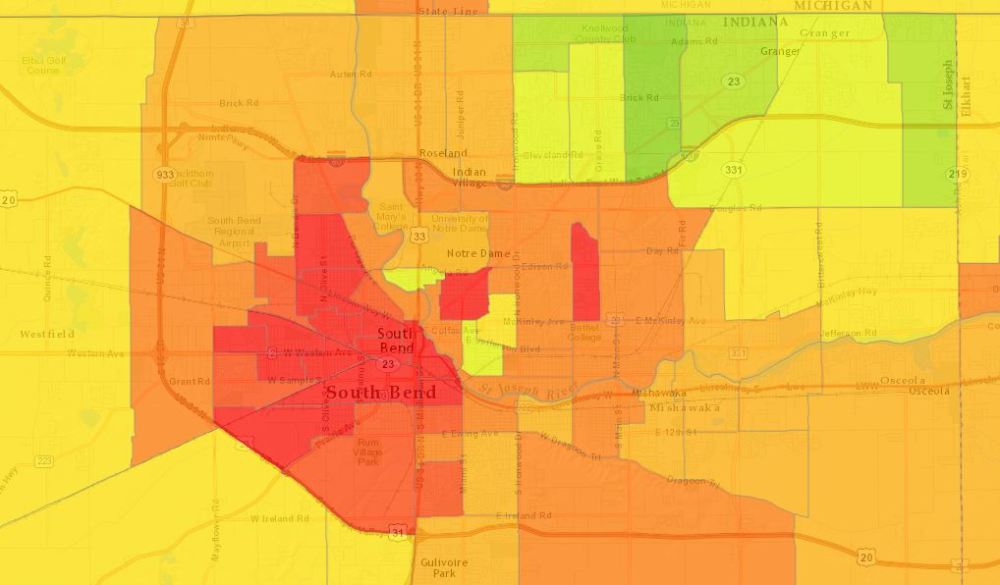 Unite for Literacy in partnership with ESRI, has developed a nationwide heat map that shows locations of book deserts. Literary deserts — where children and parents lack access to quality books — are prevalent in low-income urban neighborhoods across the United States. From the look of South Bend’s literacy heat map (shown above), only the Granger area has a strong literacy score.

While social mobility is a multi-variable equation, a key component of that mobility is literacy. According to the Equality of Opportunity Project, where you live plays as important a role in predicting future economic success.  Often, this involves looking at aspects like proximity to more affluent areas or access to quality education or even access to health food.  Access to quality books is also key, but not nearly cited as often, which is why public library‘s play such an important role within communities. But when library hours are limited or worse when they close (as is increasingly a concern with our public libraries), the effect to our community literacy is dire.

UNESCO offers broad strategies that governments can take to improve literacy, including education reform. Locally, especially in reviewing Unite for Literacy’s map of South Bend, it’s important to support the existing capacity of the school corporation and public library’s efforts.  Beyond that, where coverage of either anchor is limited, programs like the little free libraries improve access to books.