Around the world, alleys have different names that convey a very different picture of their use.  From “laneways” to “little street”, alley’s don’t have to be relegated to just service for buildings. Overcoming the perception of unsafe, dirty, and claustrophobic corridors won’t happen overnight, but the way we describe them helps change that view.

As much as we bemoan the amount of land that vehicular infrastructure takes up in cities, alleys are not often cited among the landuse hogs of parking and streets. In an article for CityLab last year, Eillie Anzilotti builds on the landuse issue, noting the aesthetic and environmental blight concerns that underutilized alleys bring.  Quoted in that article, a 2011 study out of the University of Washington notes that, “reinvigorating alleyways could increase the number of total public space in the city by 50 percent”. 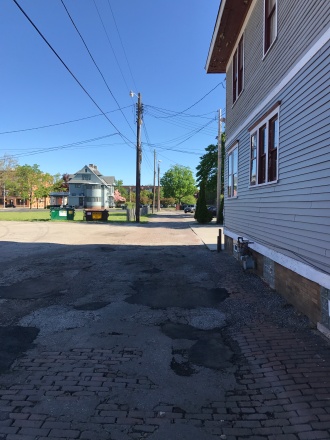 A brief study of the alley’s downtown shows many loading docks and garage doors, but also a completely different scale.  A closeness not found in other parts of South Bend, these small urban corridors represent a significant opportunity to explore and develop a cultural richness and create unique connections.