If you listen to Ian Lockwood talk about the value of land, one of his main talking points is about access to resources.  Currently, the Century Center building and by extension its parking lot, buffer access from the downtown to the City’s greatest resource in the river. Coming from the south, especially after the new roundabout, there’s no real discernible moment that indicates arrival to the downtown.  When you make it to the Century Center, the place where this moment is most likely, adjacent to one of the most prominent (and famous) pieces of architecture in the city is a moat of parking.  This space filled only a few times per year for big events lays mostly vacant.

Ten years ago, amid a study about the role of health in urban spaces, I wrote about that space as being key to the city; a potential front yard for the city.  Obviously the space has value in it’s current role, but the question must be asked: what’s the cost of keeping the space as simply parking? There are other less prominent locations for RV displays and several adjacent parking garages to accommodate large parking needs.

If the space isn’t used as it’s currently programmed, then a space that reflects the prominent architecture and a public space that connects green spaces, opens access to the river, and serves as a marker of arrival to the downtown would certainly have value.  Millennium Park in Chicago was one a parking lot that has had a dramatic impact on that city (economic impact of $1 billion per year).  Imagine the impact of a space like that on South Bend. 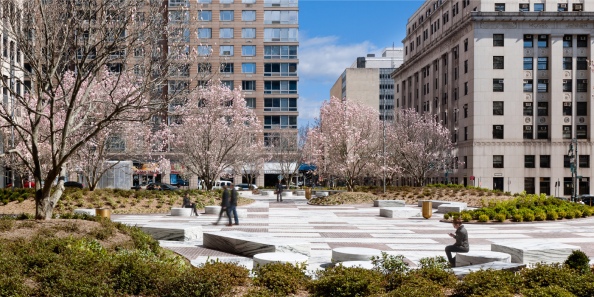 Urban plazas create dynamic public spaces and while often are smaller than the open spaces of parks, they function similarly in connecting places, serving as places for public assembly, and provide respite of the urban environment.  This space would be key in celebrating the City’s values of inclusiveness and opportunity, and beyond the economic value of this public space, it’s role in creating attachment to the City would be invaluable.